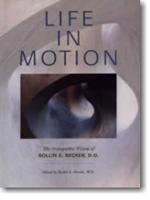 A collection of Dr. Becker's writings and lectures based on his studies with William Sutherland, D.O. (the originator of cranial osteopathy) and his 50 years of clinical experience. In his own unique way he addresses the question, What is "health" and what is the most efficient and effective way to help bring it about? One of the best books on being a practitioner with an emphasis on learning to "listen" to the clients system. Part philosophy, part poetry, this is a well grounded approach to understanding fluid based osteopathy. A rare delight!

Rollin E. Becker (1910-1996) grew up in an osteopathic household. His father, Arthur D. Becker, D.O. was a prominent and respected osteopath, who served on the faculty with Dr. Andrew Taylor Still and later was dean of two osteopathic colleges. Rollin graduated from the American School of Osteopathy (later renamed the Kirksville College of Osteopathic Medicine) in 1934, and following a few years in Oklahoma, he moved to Michigan, where he practiced for thirteen years.

In 1944, after about a decade in Michigan, he met William Garner Sutherland, D.O. and in 1948, he first served on the teaching faculty at one of Dr. Sutherland's courses. Dr. Becker moved to Texas in 1949, where he practiced until 1989. Throughout that time, he continued to serve Dr. Sutherland and his work. Dr. Becker was the president, from 1962 through 1979, of the Sutherland Cranial Teaching Foundation, an educational organization dedicated to perpetuating the teachings of W. G. Sutherland.

In the years following Dr. Sutherland's death in 1954, Dr. Becker played a crucial role in keeping his work alive. He went on to inspire generations of osteopathic teachers and students.

Rachel Brooks, M.D., has edited a remarkable collection of Becker’s best writings and lectures. . . . She has artfully brought together the essence of Becker’s philosophic vision within the greater field of osteopathy. Life in Motion is one of the top five books that, in my opinion, must be included in an osteopathic library. However [it] must not be purchased and utilized as a reference text. You are obliged to read this book cover-to-cover and then re-read it periodically to gain deeper and richer insights.. . . For those who have never studied directly with Dr. Becker, this book gives us the teachings of a master in the comfort of our living room. Becker’s ability to see beyond codes, formulas, and dogma gives us a guide to expanding our own work as osteopaths.
- Stephen F. Paulus, DO
Inter Linea Journal of Osteopathic Philosophy (Vol. 2, No. 4, December 2002)