Animal Osteopathy: A Comprehensive Guide to the Oseopathic Treatment of Animals and Birds 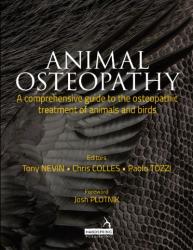 What a gorgeous book! The photos, layout, well written text and detailed illustrations make this book a joy read. It addresses the practical and ethical considerations of treating animals both large and small in a clear and concise manner. This is a comprehensive reference textbook for all those using osteopathic treatment techniques with animals or birds, or studying to do so. The book is divided into sections: equine osteopathy; general small animal osteopathy; osteopathy for exotics- (pets such as tortoise, snakes, ferrets etc); osteopathy for wildlife – native as well as non to the UK including species found in most zoological collections; avian osteopathy – both domestic and wild/exotic. Each section covers information specific to that group. This makes the book appropriate for supporting structured postgraduate university validated courses in a clear and easily navigable way.

Content includes detailed sections on the differences encountered when working with animals; health and safety around different species; working within the law; integrating with allied professions; anatomy; physiology and pathophysiology; neurology; orthopaedics; differential diagnosis; differential aetiology of presenting conditions when compared to the human model; supportive husbandry and rehabilitation methods.

It also includes sections covering approaches to patient care; specifics of taking a detailed case history; use of supporting diagnostics; observation; palpation; structuring a treatment programme suitable for each species. Osteopathic treatment techniques and physical patient contact methods are explained and graphically illustrated. All chapters are fully referenced and include revision notes to act as guidelines for the reader.

Tony graduated from the European School of Osteopathy, Maidstone, Kent in 1988. Within a year of being in private practice he was asked if he could treat a horse with a stiff neck. After seeking veterinary advice he found that he could actually help the animal in question. This set about a chain of events that have led him to pioneer the successful application of osteopathic treatment to over 300 different species and breeds of domestic and wild creatures, working through fur, hair, feathers, and scales to assist his various patients in their recovery from injury, or poor health. Based in the UK his work has taken him to various parts of the globe both treating and teaching. A popular workshop he runs is based in Northern Thailand where he introduces others to the fascinating prospect of treating elephants.
Tony is passionate about the professional growth and acceptance of this branch of osteopathic medicine, and is currently the course director on the only MSc programme which allows postgraduate osteopaths to study this fascinating subject. So far the course has seen every student graduate under his guidance.

Apart from the exotic locations Tony runs several equine and small animal clinics in the UK, where he has a particular interest in the chronic long standing problems that so often plague horses and dogs. Working within veterinary clinics and hospitals has allowed Tony to integrate osteopathic medicine with standard veterinary practice, often achieving remarkable results. He is a co-author on a ground breaking equine paper that was published in a peer reviewed veterinary journal, and has had several other minor papers published covering his elephant, wildlife, and avian work.

Chris Colles qualified as a veterinary surgeon from the Royal Veterinary College (London) in 1971. He went first into a mixed practice and then to an equine practice, before joining the Animal Health Trust in 1975 where he carried out research into equine lameness. He was appointed Head of the Equine Clinical Department before returning to specialised equine practice in 1988. He has specialised for 40 years in equine lameness, being awarded a PhD from the University of London for research into navicular disease in 1981. He was recognised as a Specialist in Equine Surgery by the Royal College of Veterinary Surgeons in 1996. In 2000 he was awarded an Honorary Fellowship of the Worshipful Company of Farriers for research and teaching on horse’s feet and shoeing.

Chris became involved with osteopathy in the treatment of horses in 1990, collaborating with the late Anthony Pusey, with whom he published a number of papers on equine osteopathy and thermography, as well as giving a number of joint lectures.

Chris has written over 40 scientific papers, and contributed to or written nine textbooks, as well as lecturing around the world, primarily on equine lameness.

Paolo Tozzi MSc Ost, DO, PT is Principal of the First Italian School of Veterinary Osteopathy, Vice-Principal of the Italian Association of Posturologists, former Treasurer of the Osteopathic European Academic Network (OsEAN), and former Vice Principal of CROMON, the Centre for Holistic Research in Osteopathy and Natural Medicine, Rome.

He lectures widely on osteopathy, biomechanics and manual therapy, and organized the first international congress on veterinary osteopathy (Rome 2012).

This is a fascinating book, full of contributions from an incredible array of highly respected people from the field of animal osteopathy. Tony Nevin, famous for his work on elephants, was one of the brilliant contributors to Sue Palmer’s excellent book Understanding Horse Performance, Brain, Pain or Training.

Animal Osteopathy is split into chapters for different species of animal, and the chapters are written by different contributors dependent upon their specialty. Whilst one might except to only be interested in the animals that one is already interested in, for example dogs and horses, actually the other chapters are equally as fascinating. I particularly found the chapter on small furries, including rabbits, rats and guinea pigs, completely riveting, having never considered that you would be able to treat such a small animal using osteopathy.

This book is a must for anyone who is considering a career in animal osteopathy, or indeed other related fields, such as physio or equine massage. It will only serve to increase your knowledge and open your eyes to the extent of what you can do with the skills you want to learn.

Equally anyone who is interested in what their osteopath is doing to their animals will find this book engrossing and absorbing. While there are sections of detailed scientific descriptions, these are well-written and can be understood and enjoyed by non-professionals. Many books veer between being too scientific for lay people to understand and too simplistic for those with a basic working knowledge of the subject. This book rides a good line between the two, which is a difficult thing to do!

The difference and similarities between the species is discussed which is eye-opening. I had never considered the difference in body mass to skeleton size across the species before, and it certainly increased my understanding of the different species of animals.
Review by Liz Hopkinson : Ethical Horse Products